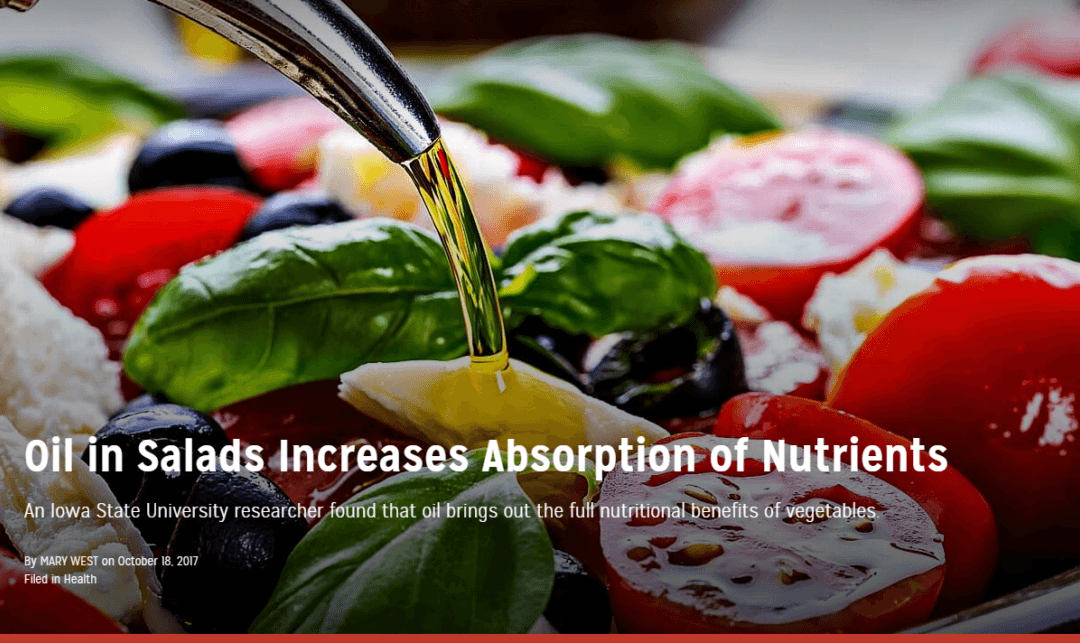 Because nutrients in food work synergistically, eating a combination of certain foods is often more beneficial than eating them alone, and such is the case with drizzling oil over your salad. The oil boosts the absorption of eight micronutrients, according to new research published in the American Journal of Clinical Nutrition.

The best way to explain it would be to say that adding twice the amount of salad dressing leads to twice the nutrient absorption.- Wendy White, Iowa State University

While soybean oil was used in the study, olive oil would be a better choice because of the numerous health benefits associated with it.

Lead author Wendy White, an associate professor of food science and human nutrition also found that eating a salad without oil reduced the likelihood that the nutrients in the vegetables would be absorbed.

The eight nutrients involved are needed for good health. They include four carotenoids: alpha-carotene, beta-carotene, lycopene, and lutein. The remaining three are vitamin K and two forms of vitamin E.

The oil also aided in the absorption of vitamin A, which is made in the intestines from alpha and beta-carotene. Increased absorption of the nutrients produces important wellness advantages such as vision preservation and cancer prevention.

Absorption of the nutrients correlated with the amount of oil added to the salad. This means that the more oil used, the better the nutrients were absorbed.

“The best way to explain it would be to say that adding twice the amount of salad dressing leads to twice the nutrient absorption,” White said.

Despite the findings, consumers shouldn’t drench their greens with dressing, White cautioned. Instead, she recommends following the U.S. dietary guideline of including two tablespoons of oil per day in the diet.

In the study, 12 college-age women ate salads with different amounts of soybean oil, which is a standard ingredient in salad dressings. Afterwards, the levels of nutrients in their blood were measured to determine how much was absorbed. The results showed those who consumed the most oil, which was a little over two tablespoons, absorbed the maximum amount of nutrients.

“For most people, the oil is going to benefit nutrient absorption,” White said. “The average trend, which was statistically significant, was for increased absorption.”

Although the study clearly showed that drizzling oil over salads presents an advantage, soybean oil may not be the best choice. According to Joseph Mercola, noted natural health practitioner, olive oil would be far more healthful. He warns that soybean oil contains highly processed omega-6 fatty acids, which promote inflammation, the condition underlying most chronic disease.

Conversely, olive oil, a fat rich in antioxidants and important vitamins, has anti-inflammatory properties and may reduce the risk of chronic diseases like cardiovascular disorders and diabetes. In addition, since olive oil is also associated with weight loss, even dieters can pour a liberal amount over their greens.